First Commonwealth Financial and the Future of Community Banking 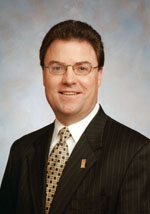 During this lunch program, Mr. Dolan will share with us his experience at First Commonwealth and discuss the future role of community banking given the evolving market and regulatory landscape.

The registration price includes a beverage (coffee, tea, or iced tea), an entree selection, and dessert.

In March 2007, John Dolan became only the third President and CEO in the company’s history.  Prior to his appointment as CEO, Dolan served as the company’s Chief Financial Officer for 22 years.  Dolan began his career with the company in 1980 and has held numerous executive positions over the course of his 30-year tenure, during which time the organization grew from a small community bank with $215 million in assets to a $6.0 billion financial services organization.

A native of Wheeling, West Virginia, Dolan is a graduate of West Liberty State College (WV) having earned a Bachelor's Degree in Business Administration with a specialization in Accounting (1978).  Dolan is a former Board member of the Pennsylvania State Board of Accountancy.